“Bourgeois society stands at the crossroads, either transition to Socialism or regression into Barbarism.” [1]

When German communist Rosa Luxemburg wrote those words in 1916, Europe was tearing itself apart in the trenches of World War I. And although the world is not currently engaged in the self-destructive total war of the past century, yet again the question stands: Do we want the barbarity of modern capitalist society or a different, a better world?

Drastic words, some of you might say, and you would be right. But to understand why I feel compelled to ask this question, we have to look back to the last few days and what has happened in the United States and the US stock exchange more specifically.
Covid-19, the disease currently spreading around the globe in a pandemic not seen since the Spanish Flu ravaged the world shortly after World War I, is just ramping up in these days. We are at the beginning of this pandemic, not the middle or endpoint. As you all probably know all too well by now, “flattening the curve” is the order of the day. In all nations, healthcare systems have a breaking point that is reached when the rate of new cases with serious symptoms that require medical attention is hospitals outpace the rate at which patients are discharged, leading to a situation in which hospitals can no longer treat new patients. Which, in turn, massively increases the death toll of the epidemic. To put that into perspective: Germany has a hospital capacity of 8,0 per 1000 citizens [2], meaning that there are 8 intensive care beds in hospitals across the country for every 1000 citizens and 25.000 ventilators for mechanically assisted breathing in total across the whole country. [3] For the US the numbers are 2,77 beds for 1000 citizens [4] and 177.000 ventilators across the country. [5]

Just to repeat this, even though most of you will know by now: Flattening the curve of an outbreak is critical to prevent too many people getting critically ill at the same time, overwhelming the healthcare system with more critical cases then they can handle. If in the US 5 out of 1000 citizens get critically ill at the same time, more than half those people will, due to the number of available beds in hospitals, not get the medical attention they need and possibly die or duffer negative long-term consequences due to not getting properly treated.

That is why social distancing at the beginning of an outbreak is so crucial: Measures like these prolong the outbreak (something that sounds counterintuitive) and spread the number of people critically ill over a longer period of time, giving the hospital system of a given country much needed breathing space.

The costs of such an approach are obvious: Public life grinds to a stand-still, the economy suffers immensely due to trade coming to a halt alongside public life, but hundreds of thousands if not millions of lives are saved. An approach many countries, thankfully, have taken so far, even if it means massive economic damage and great restrictions on the freedoms of citizens many enjoy as a matter of course around the globe.

But not all. The United States, led by a man who has, over the course of this outbreak, changed his tune from downplaying the risks Covid-19 could pose for his country to finally listening to expert advice and taking necessary steps to flatten the curve and then – in his usual fashion – bragging about how he knew how bad things could get all along are yet again in for a change of course. And what he is now saying and how different sets of people are reacting to what he is saying should horrify the globe.

Let us look first at what the 45th president has said. Just as New York, the US state that, with over 25.000 cases, currently accounts for over half of all cases in the country, will soon reach the afore mentioned breaking point in its healthcare system, [7] Trump is openly talking about ending the national state of emergency by Easter. At the time of me writing this, Easter is just over two weeks away. To quote the man: “You are going to lose a number of people to the flu, but you are going to lose more people by putting a country into a massive recession or depression”. [8] Not only did the president get his diseases mixed up, he yet again, as he did several times in previous weeks, mistakenly compared the death toll of a seasonal Influenza epidemic to Covid-19. Just to put these numbers into perspective: The seasonal flu, depending on the severity of a certain year’s outbreak, comes with a death toll varying between 12.000 and 61.000 deaths in the United States and between 250.000 and 500.000 people globally, which is a mortality rate of about 0,1%. [9]

Covid-19, in comparison, currently sits at an estimated mortality rate of 3,4% according to the World Health Organization and the United States Centre for Disease Control. [10] To understand how severe of a difference that is, just compare the numbers: During an average Influenza season in the US, an estimated 20% of citizens contract the virus, including people who show no symptoms. [11] That means that the average flu epidemic infects 65.400.000 people (20% of the US’ 327.000.000 citizens) and kills 65.400 of those infected (or the afore mentioned 0,1%). Let us take the same numbers for Covid-19. If 20% of US citizens contract the disease, so the same 65.400.000 people, a mortality rate of 3,4% means that Covid-19 would, in the same situation, kill 2.223.600 people. Over two million compared to roughly sixty-five thousand. This cannot be emphasized enough: Covid-19 is not the flu. It is orders of magnitudes worse.

Yet the 45th president of the United States keeps on telling the public that this new pandemic isn’t worse than your average outbreak of the flu. This reckless behaviour could potentially cost millions of lives. But the true barbarism lies in the question of “why”. To understand why, look at this: 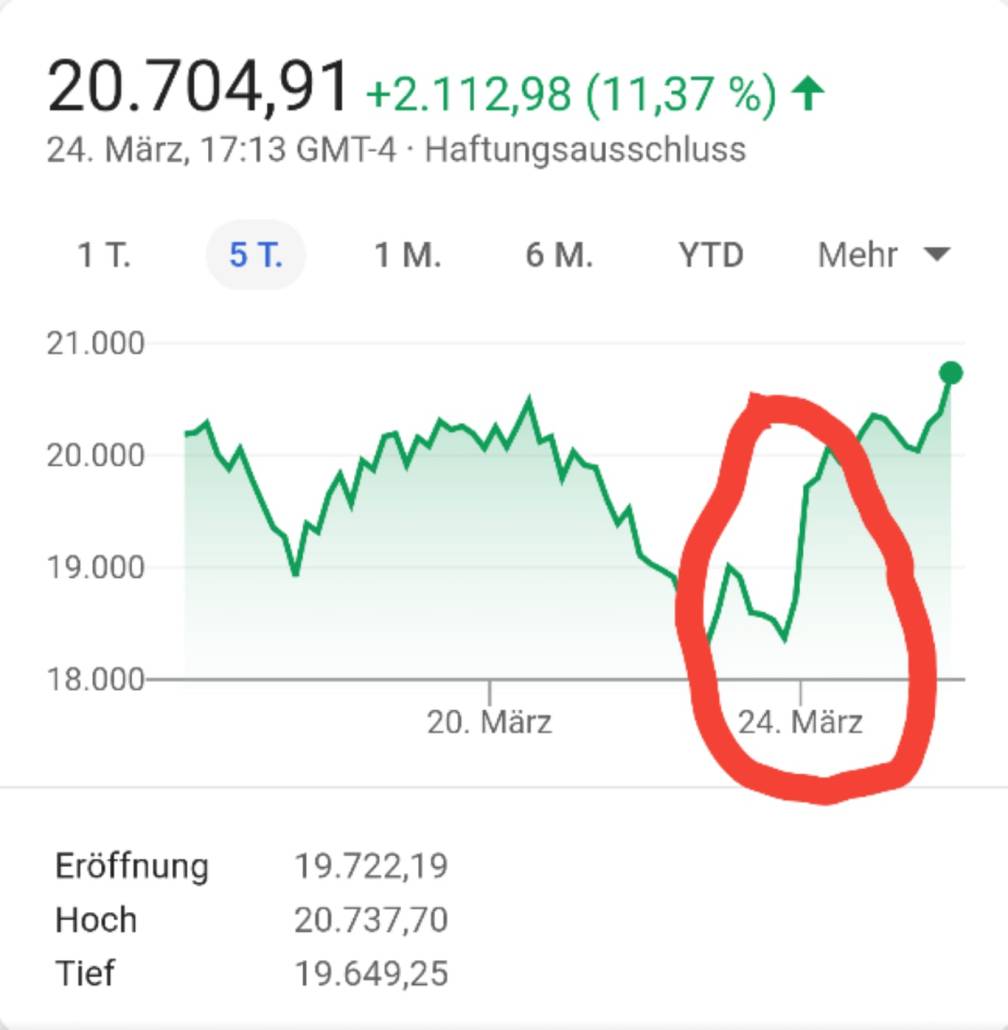 On the 24th of March, the Dow Jones had its biggest one-day jump since 1933, ending at well over 11% compared to the previous market day. But contrary to what well known financial publications like the Wall Street Journal wrote that day [13], that meteoric rise in stock had nothing to do with the stimulus package the Senate and White House managed to tie up just today, the 25th of March. Because on the 24th, prospects for a potential deal between Senate Republicans and Democrats, who had for days blocked agreement over the stimulus package, only lightened well after the New York stock exchange had already closed. [14]

Instead, what happened on the same day shares on the stock exchange soared was Donald Trump’s FOX News town hall conference, in which he made the afore mentioned remarks about re-opening the US for business as usual as soon as Easter. [15]

And this is the true barbarism of our time. Donald Trump announcing measures that might mean the deaths of millions of American citizens made the Dow Jones sore higher than at any point in the last decades. American politicians, economists and media figures are now openly talking about sacrificing millions of lives in exchange for better stock exchange values. FOX News host Tucker Carlson just yesterday, on the 24th, interviewed the Lieutenant Governor of Texas, Dan Patrick, where he suggested senior citizens would gladly sacrifice their lives in order to, and I quote, “keeping the America that all America loves for their children and grandchildren.” [16] What the man means, of course, is the America stock brokers love and cherish, because the Dow Jones does not represent the prosperity of most American citizens, it represents the economic prosperity of a chosen few. Over 84% of all stock value is owned by just the richest 10% of American households. [17] It is these 10% that people are now asked to lay down their lives for.

And the United States is by no means alone in this. In Russia, for example, Covid-19 has no official death toll at all, because the officl statistics don’t refer to Covid-19 as a cause of death. At all. Rather pneumonia, one of the chief effects of severe cases of Covid-19, are listed as causes of death for those dying in Russian hospitals after contracting the new infection. Doctors publicly claiming what all the worlds knows – or should know – are threatened with legal action. Widespread testing is not available, which probably accounts for the comparatively low numbers of Covid-19 cases Russia has, and on top of that the Russian developed test for the desease seems to be highly ineffective. Public transportation is still in high use, resturants and other buissnesses remain open. And the Russian Orthody Church continues to hold mass, where believers are sharing in the communion from the same silver spoon. [18] All to both calm investors and lull the public into thinking its all-powerfull government is in complete controll.

If you have ever watched a documentary about the Aztecs and wondered to yourself how a society could possibly tolerate human sacrifices to please the gods, wonder no more: You live in one.